Shop at The Emporium to Support Mesilla Valley Hospice - LasCruces.com

Shop at The Emporium to Support Mesilla Valley Hospice Since it opened more than five years ago, The Emporium has generated thousands of dollars a month for Mesilla Valley Hospice. But for the baker’s dozen Las Cruces ladies who volunteer to run it, The Emporium is a true labor of love.

Longtime Las Cruces activist Heather Pollard was involved from day one in the capital campaign that led to the creation of the hospice in 1982. More than 30 years later, Heather became part of a group looking for a way to support hospice financially, without creating competition for other local nonprofits. She had seen a high-end secondhand store supporting a hospice in Phoenix, and suggested the same for Las Cruces — and she helped make it happen.

The Emporium is operated by volunteers

Heather and a dozen other Las Cruces ladies staff The Emporium on a 100-percent volunteer basis. Many, like Heather, have strong personal ties to Mesilla Valley Hospice.

Volunteer Bonnie Schurtz’s mother-in-law was one of the first patients there in 1983.

“They were so wonderful,” Bonnie remembers. “They came to the house,” she said, and helped her and her husband, Gerry, deal with the illness and death. “It was pretty petrifying,” Bonnie recalled. “I’d never been around anyone dying. They were just so wonderful.”

Another volunteer, Joanne Achen, had a brother at Mesilla Valley Hospice and really appreciated what the staff there did for him. Joann said she likes working at The Emporium — “It’s fun to work with Heather.”Volunteer Vicki Hamre moved to Las Cruces with her husband three years ago, buying a smaller home here. They donated their extra furniture to The Emporium, where she also searched for a small table that would fit into her new home.

“I found the exact thing I needed,” Vicki said. “Everything is sort of full circle.”

Vicki also joined The Emporium team. Volunteering at The Emporium and supporting Mesilla Valley Hospice “has been the most enriching experience of my life,” she said. “The hospice people really are incredible. I also love to work here. We all love antiques and we learn a lot. We have a lot of fun for a good cause.”

The Emporium’s volunteers are like a social club, said Leana Revell, who became a volunteer after moving back to Las Cruces four years ago. “It’s a nice group of friends,” she said. Leana had retired from a nursing career and was looking to get more involved in the community. The Emporium, she said, was “just perfect. I love it. It’s fun [and] it’s really important to me to give back to the community. This hospice is like nothing I’ve ever seen.”

Hospice had been really helpful when Diane Benson’s mother died in 2012. They were, she said, “a lifesaver to me.” Working at The Emporium and supporting hospice gave her purpose. “There’s always somebody to talk to.” Diane also says she is “always amazed at the quality of things people donate.”

“Every day, you come in and you look and see what’s new,” Leana said. Many of the items for sale have “come from family members who have used hospice and they want to give back.” The Emporium volunteers always find a good home for each donation while honoring the donor’s family member or spouse at the same time.

“We’ve learned the history of things and the people who owned them,” Vicki said. “It makes it feel so “Learning where things come from — personally and historically — that’s part of the fun,” Joanne said.

Research is sometimes involved, Leana said, including searches on eBay and other websites to find items that are similar to donations to learn their history and value. Leana especially enjoyed finding out about a large Kachina doll that was donated — and quickly sold — a few months ago. Leana found out it was a kiva kachina, and learned who made it after taking the doll to a museum appraiser.

“This group of women is so knowledgeable about antiques,” Leana said.

“It’s been a lot of fun working with friends and meeting new friends,” said Phala White, who worked at hospice for many years before joining The Emporium volunteers. “I love people coming in and hearing their stories,” she said. “People love to donate,” and the volunteers love it because they know each piece they sell will be loved and enjoyed by someone else. Or, she said, “We may even buy it ourselves.”

With all the purchases she’s made since becoming a volunteer, Phala said working at The Emporium “has cost me about $100 an hour.”

“It’s the most expensive job I’ve ever had,” Leana added. works (Joanne), a couch made out of a camel bladder (Diane), a photo from the I Love Lucy television series (Phala), a Queen Anne china set (Bonnie), a Queen Elizabeth pattern wedding set (Heather), and a cut-crystal lamp with hanging prisms from the 1920s (Vicki).

“All in all, it’s been a fabulous experience,” Joanne said. 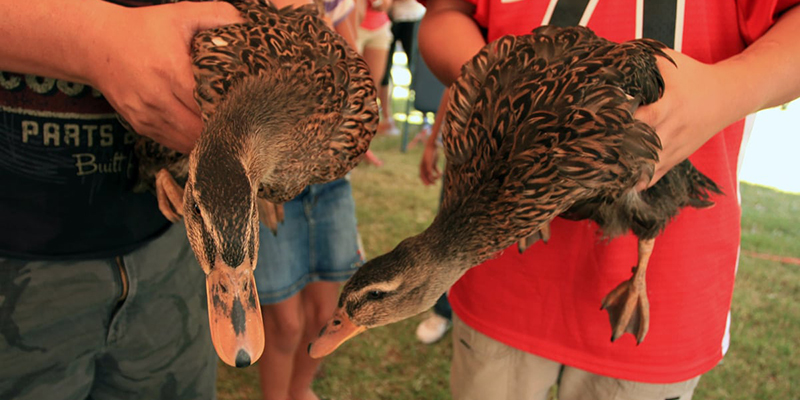 Every August thousands flock to Deming to laugh and cheer at the Tournament of Ducks Parade, the Duck Royalty Pageant … Read More If you like Shop at The Emporium to Support Mesilla Valley Hospice ...Check This Out