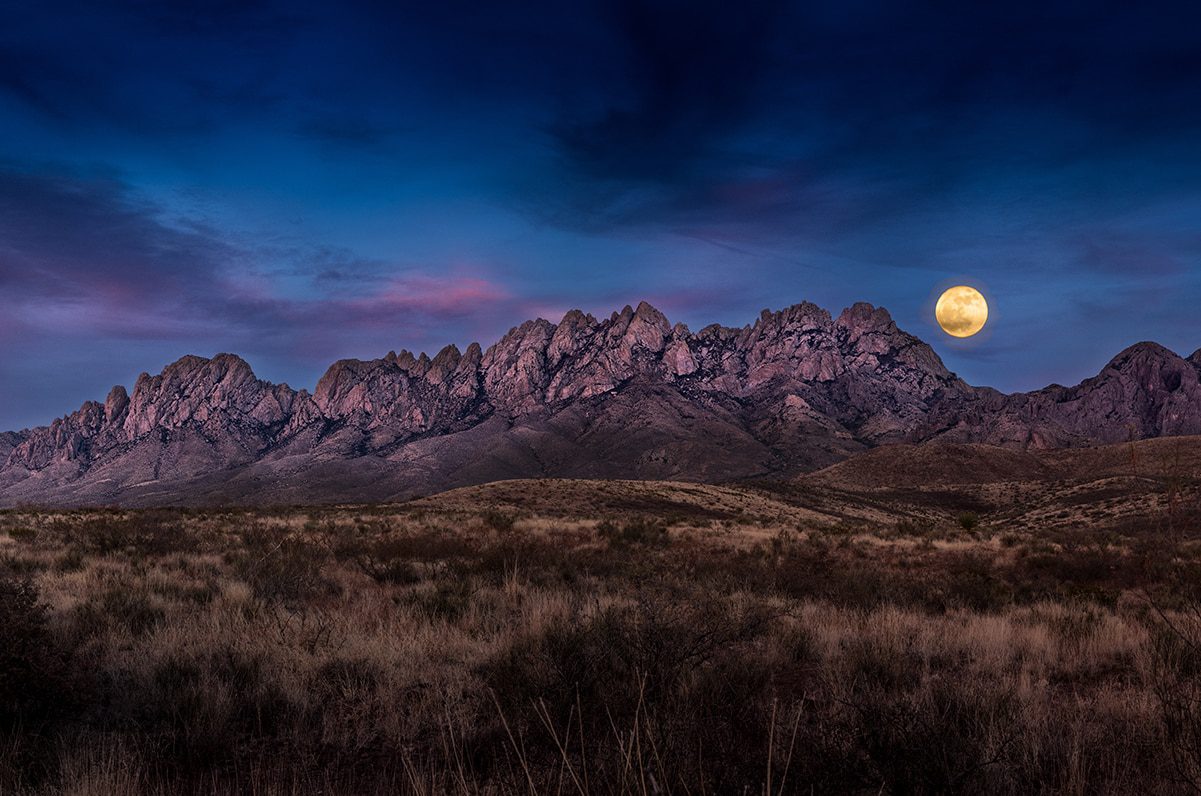 Most Las Crucens see the Organs from the valley floor — the mountains’ craggy spires towering over the city. Intrepid hikers, however, climb the strenuous trail to the top for views few ever see: 360-degree panoramas for 100 miles in any direction.

On a clear day, from the summit, hikers can see the glistening dunes of White Sands National Monument crest in perfect waves of gypsum to the east. To the west, Las Cruces unfolds, and the Florida Mountains outside Deming rise 75 miles away as the crow flies.

“You feel like you’re on top of the world,” says Edward Audi, 41, a hiker from Tucson, Arizona, who drove in just for the climb. And you nearly are: At 9,012 feet, the Organ Needle is the highest peak in Southern New Mexico.

Edward is just one of the dozens of hikers who have joined Las Crucen John Lowry on excursions to the apex. The journey is nothing short of arduous, with climbers taking it on to see the views, check it off their local bucket lists, to complete the physical challenge, or for personal growth.

The Most Difficult Trail in New Mexico

Even experienced hikers often describe the Organ Needle hike as the most difficult in New Mexico. La Luz Trail in Albuquerque to the crest of the Sandia Mountains climbs 3,775 feet over eight miles. The trail up Wheeler Peak, New Mexico’s highest point at 13,161 feet in elevation, ascends 2,900 feet along its eight miles. The trail to the top of the Organs’ pipes climbs 4,490 feet in four miles; it’s nearly entirely uphill, without the aid of switchbacks to ease the grade. Difficult enough, but there’s also this: At points in the trial, trekkers must scramble up the underdeveloped trails, using their arms and hands to gain purchase on the rocky, steep slope and primitive trail. The hike usually takes 10 hours — though John has accomplished it in as few as seven with an experienced, fit group.
John recommends newcomers only attempt the hike with someone who has completed it previously. In fact, if you ask in at the Dripping Springs Natural Area visitor center, the locale of the trailhead, they’ll give you John’s name — as well as those of other experienced hikers — and suggest you contact him for information. Drew McPhee, 58, another of the hikers to which the staff refers, attests that even GPS will lead you astray on this trail — he observed one such hiker attempting, and failing, to navigate with a device this spring.

John’s first successful trip to the top was with a friend. (He tried it previously with two Needle novice co-workers first, but fell 250 feet short of the summit because he wasn’t aware of the pitch that accessed it.) Once he’d completed it, he quickly found that he wanted to share the experience with others. He’s since led two hikes a year — one in April and one in October — for the past seven years.

John aims for 10 to 12 participants, though his April 2015 group had 18 and he’s led groups of up to 20 participants. He doesn’t represent any organization, or charge or accept money to guide the hike. “It’s not my intention to profit financially. I find a lot of satisfaction and enjoyment in sharing challenges with people who are likeminded,” John says. At age 67, John also enjoys the personal satisfaction of proving he can complete the challenge yet again. He does, he confesses, have an ulterior motive: As a member of the volunteer Doña Ana County Search and Rescue group, he’s eager to familiarize the public with the mountains. The more familiar they are, the less likely they are to encounter problems.

When John told emergency room nurse Kassidy Nunn, 28, about the trip, “I basically couldn’t say ‘no.’ I’d heard about the hike, and I’d read about it. It said that it was intense. It wasn’t something I wanted to try on my own.” Cassidy joined John in April 2015.

Although the trail starts off relatively flat, it quickly turns into a Stairmaster to the top. Kassidy works 12-hour shifts and runs, even still, she observes, “I thought I was well prepared. I definitely wasn’t. You’re going straight up the entire time. It’s a huge staircase, that’s really what it is.”

Though the aerobic section may be difficult, John attests that the most psychologically difficult section falls just before the summit. A fully exposed, 25-foot pitch requires people to rock climb. “It’s a challenge for people who have an aversion to heights. A fall could be quite serious, but there are good foot- and handholds. It’s still a challenge emotionally,” John says.

Drew often accompanies John on the hikes to act as a sweep—the last person in the group who makes sure no one falls behind, and who encourages those who are having a difficult time. Occasionally, if hikers are struggling too much, John and Drew ask participants to wait along the trail or to return to the trailhead with a partner. For the most part, however, they coach participants through even the most fearsome parts of the trail.

Once at the top, John gives participants time to take in the surrounds. Laura Henry, 32, who also hiked the Needle for the first time in April, says, “When I’m coming back from a trip, I look forward to seeing the mountains. That’s when I know I’m home. It’s always been a dream of mine to hike to the top. Seeing the views from the top of the mountain and being able to see in every direction really gives you a completely different perspective.”

Even the return trip isn’t easy. With the steepness of the trail and loose rock, with climbers’ legs beginning to show fatigue, there are often slips and falls coming back down the mountain. Laura anticipates she’ll lose a toenail, which bruised and blackened from the pressure against her shoes during her descent.
Like many other hikers, Kassidy wasn’t going to be deterred. But she had special motivation. During the year prior, she’d had a lot of life changes. April 2015 marked a year since she’d left a physically and emotionally abusive relationship and became a single mom to her children. “The hike was a cleansing experience for me. I wanted to go do something really hard and say that I accomplished it. It was more than doing a hard hike for me,” she says. She plans on doing the hike twice a year for as long as she can.

Throughout the hike, companionship emerges among the participants—though they were strangers at the start of the 10-hour journey. “I’m used to hiking alone,” Edward says. “I liked the camaraderie of doing the experience together.”

Many from the group often gather after the hike for a potluck meal. Whether for the views, the accomplishment, or the friendship, the experience is unmatched. Drew observes, “For the rest of your life, you can look at the Organ Needles and tell people you’ve been up there. You’ll have done something that not a lot of people have.”

Looking to get away from it all? Backpacking offers an opportunity to reconnect with nature, escape the stresses of daily … Read More What is your passion: fur, feathers, or flowers and fauna? Or perhaps you are an aficionado of rocks and ruins, … Read More If you like Las Cruces Outdoors | Hiking the Organ Needle ...Check This Out