Home » Bar » Things To Do in Las Cruces | Rad Retrocade 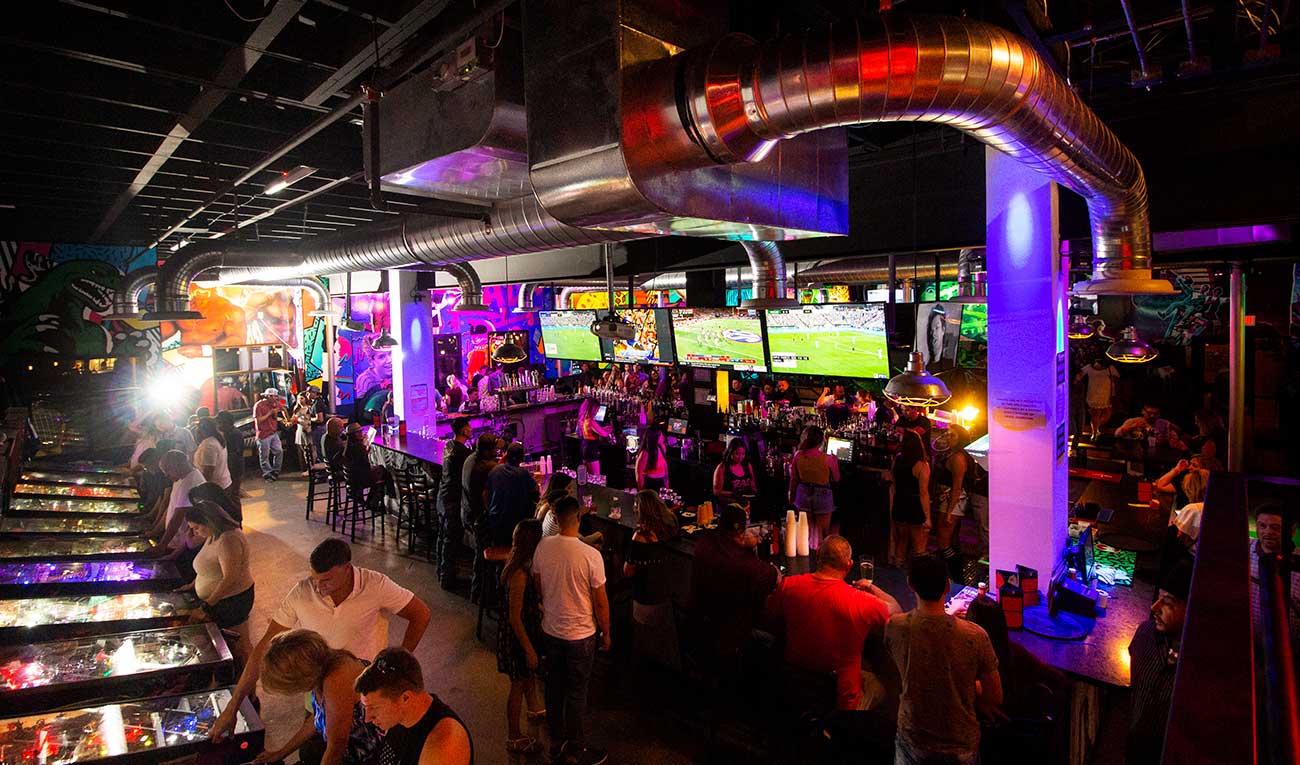 Those eager to step back in time to the glory days of arcade gaming and recapture a few high scores should stop by Rad Retrocade in downtown Las Cruces.

Rad Retrocade, 210 N. Main St., occupies the space that once held one of the first JCPenney stores in New Mexico. The two-story, 11,000-square-foot space is opening in phases, with the 8,700-square-foot first-floor now open, and phase two — a 2,400-square-foot second story — eventually home to a “pop-up” bar with themes that rotate every few months. Walls are wrapped floor-to-ceiling with splashes of neon and the likenesses of all the pop icons and idols of the 1980s and ’90s. It’s like nothing else in Las Cruces, with an aesthetic that might just take gamers back to the golden era of Tilt or, if you’re as old as I am, Power Play.

With more than 50 arcade games, stretching from the late 1970s and the golden age of arcade gaming up through the state-of-the-art machines of today, on more than 4,000 square feet of gaming space, there’s something to appeal to every gamer, young and old.

Alongside these classic arcade machines stand staples like basketball, Skee-Ball, and a curated selection of pinball machines from 1989 through today — an original Back to the Future machine, perfectly restored; Terminator 2, Jurassic Park and, of course, the best-selling machine of all time, Addams Family, along with new releases like Deadpool and Guardians of the Galaxy. This gallery of games surrounds a large central bar serving beer, wine, liquor, mixed drinks, and a selection of frozen drinks and unique cocktails. Beat the heat with the Runt2D2, a fruity frozen drink made with Strawberry Smirnoff vodka and topped with Runts candy; the Senor Pete, a frozen mango-chamoy drink, made with Mango Smirnoff and topped with a mango-chile lollipop; and the Surfer Dude, a frozen prickly-pear drink topped with Grapefruit Smirnoff.

Cocktails include the Tennessee Mule, a Moscow Mule made with Jack Daniels and just a hint of raspberry; the refreshing Prickly Hippy, made with Jose Cuervo Tradicional; and the refreshing, bright blue Old Blue, made with Firefly Moonshine.

Rad Retrocade’s full kitchen menu includes a selection of munchies including fried pickles, chicken and waffles, chicken wings, and beer-battered mushrooms, along with unique fare like the Marty McFries — hand-cut fries or sweet potato fries, seasoned and served with a marshmallow dip — and the Garbage Pail Nachos, named for the stomach-churning 1980s Topps trading cards, with your choice of chicken, pulled pork or ground beef, topped with pico de gallo, black beans, shredded cheese, sour cream, and a drizzle of hot sauce.

Main dishes include classics like fish tacos, shrimp po’boys, pulled pork and chicken cordon bleu sandwiches; others, like The Jigowatt Burger, The McFly, The Biff, and The Doc Brown, owe their names to the ultimate in throwback in entertainment, Back to the Future. Feeling spicy? Order up the Hot Cheeto Cheeseburger, an eight-ounce patty topped greens, tomato, onion, queso and, of course, Hot Cheetos, on a butter bun.

There’s also a lighter side, with a classic house, chicken Caesar, and strawberry chicken salad along with plenty of sides.

Rad Retrocade is the latest venture by El Paso entrepreneurs and NMSU alumni Alex and Mariana Macias, who masterminded the popular Rubik’s Arcade Bar in El Paso. Taking the lessons learned from their four years at the helm of the popular college hotspot in El Paso, Alex and Mariana settled on Las Cruces for their next move, and set out to make something wholly unique.

“We want to bring something really different and really cool to Las Cruces, and something that people will appreciate,” said Alex a few months before the concept opened its doors. “That’s why we came here. We know Las Cruces would really appreciate something like this, so let’s give them the best bar we can give them, let’s go in there 100 percent.”

“My wife and I have designed this from the ground up, and we’ve got a lot of really cool surprises when you walk in,” he continued. “There’s never been something like this in Las Cruces. It’s not a bar — we’re trying to build an experience.”

A lifelong gamer, Alex said the selection and authenticity of the games ready for play is one thing that sets Rad Retrocade apart. Many of the pinball machines that line the arcade’s walls came from Alex’s own home, play-tested over the years by himself and a corps of dedicated gamers and friends.

Despite changing tastes and technologies, these are the games that have stood the test of time, that draw crowds even today, and that Alex is excited to share with a whole new generation of gamers.

“I think that’s one of the things that’s going to make us unique,” Alex said. “Going into this, I didn’t look up the top-five games of the 1990s. The games here are the games I played, the games I went to the arcade and saw people lined up for — I was there and saw how popular they were. This bar will have an authentic feel because it is authentic.”

While many establishments aim for “fun for all ages,” Rad Retrocade actually manages the balance — it’s open to families during the day, and in the evenings, guests are limited to those drinking age, 21 and older.

Note: As of September 2020, Rad Retrocade was not yet re-opened based on the state’s COVID-19 regulations. Check before visiting to see if they are open. If you like Things To Do in Las Cruces | Rad Retrocade ...Check This Out Las Cruces may not be a skiing mecca, but the slopes of the nation’s southernmost mountain nearing 12,000 feet in … Read More