William Henry McCarty was born around 1859, perhaps in an Irish slum in New York City. There is no irrefutable proof of exactly where and when he was born. When his mother, Catherine, married William Antrim in Kansas, he assumed his step-father’s last name. Even later, he chose the alias William Bonney, from which grew the legendary name, Billy the Kid. Follow his path and walk in his footsteps at these landmarks, right here in Southern New Mexico.

Silver City: Where a Man Became an Outlaw

In 1874, Billy’s mother died of tuberculosis while the family was living in Silver City. He may have been 12 years old, as some childhood friends claimed. He may have been 15, if the stories of Billy during the Lincoln County War are accurate. In any case, Billy took up with George “Sombrero Jack” Schaefer, a disreputable friend who supported his drunkenness by stealing.

Schaefer broke into Charlie Sun’s house and took some $200 in goods from the Chinese laundryman. Then, he convinced Billy to stash the loot in his room. He may even have taken a turn around town wearing some of the purloined women’s clothes, an act strictly forbidden in the 1800s.

Sarah Brown, who kept the boarding house where Billy lived, notified Sheriff Harvey Whitehill, who arrested Billy, ostensibly to deter future misdeeds. Though the crime carried only a misdemeanor sentence, Billy escaped the jailhouse by shinnying up the chimney.

War Breaks Out in Lincoln County

Billy drifted for a few years, working as ranch hand, gambler, and gang member and becoming skilled in the use of the Winchester rifle and Colt revolver. In 1878, war broke out in Lincoln County, with Billy on the side of the Regulators against Lawrence Murphy, James Dolan, and Sheriff William Brady.

When Sheriff Brady was killed, only Bonney was accused of the murder, although he died from at least a dozen gunshot wounds from six guns aimed at him. The war came to its end when the Murphy-Dolan gang trapped the Regulators in a house and set fire to it. As the Regulators attempted to escape from the back, they were shot dead. Billy and one other man managed to escape.

Today, visitors can visit the living history museum in Lincoln and visit many of the buildings that played a part in the war.

In 1880, Billy was attempting to steal horses in White Oaks, right outside Lincoln County. Sheriff James Carlyle formed a posse and cornered the Bonney gang in the ranch house of Jim Greathouse, about 40 miles north of Carrizozo. Negotiating a surrender, Billy agreed to let Carlyle into the house to discuss terms. Some hours later, a man came crashing through a window. Thinking it was Billy, the sheriff’s posse opened fire, but the man flying through the window was Carlyle, who died at the hands of his own men.

Visit White Oaks and see a collection of historic Victorian Homes, most privately owned, and many built when Billy roamed the area. In the community cemetery, find the grave of James Bell, whose tombstone is inscribed “Died April 25, 1881. Murdered by William Bonney, AKA ‘Billy the Kid,’ during his escape from the Lincoln County jail.”

On December 21, 1880, Billy and his gang were barricaded in a farmhouse at Stinking Springs, about 15 miles east of Fort Sumner. Pat Garrett and his posse were waiting outside in the biting cold. Garrett sent to the nearby Wilcox ranch for food for his hungry men and, as they cooked steaks, the aroma of the meat penetrated the farmhouse. It was just too much for Billy and his gang. They agreed to surrender if the posse would share the hot meal with them.

On Trial in Mesilla

Garrett hauled Billy to the Doña Ana courthouse in Mesilla for trial, which was held in a pink stucco building, today a gift shop on the southeast corner of the Mesilla Plaza. It was built when Mesilla was founded and originally was owned by Narcisco Valencia. He sold it in 1859 to Zanobia Madrid, who operated a store until after the Civil War, when, for a while, it was the county courthouse. Here, Billy was convicted of murder and sentenced to hang, once he was returned to Lincoln.

Las Cruces artist, Bob Diven, created a life-size clay sculpture of Billy the Kid with the intention of creating a limited-edition series of bronze castings of the work.

Billy the Kid was held in the second-story jail cell in the Murphy-Dolan building, which served as the courthouse after Murphy’s business failed. He was guarded by James Bell and Robert Ollinger. While Ollinger was across the street having dinner at the Whorley Hotel, Billy— whose hands were small—slipped off the cuffs that bound him. He grabbed Bell’s gun and shot him. For some reason, the gun case was right outside the cell, so he grabbed a shotgun and fled. Ollinger heard the shooting and ran from the hotel to investigate. He fell dead from Billy’s shotgun blast. Bonney had the jail handyman cut off his shackles, mounted a horse, and rode away, shouting “Adios, Compadres.”

Garrett was informed by Pete Maxwell that Billy was hanging out at his place near Fort Sumner. He stationed two deputies on the porch and went into the bedroom to ask Maxwell if he knew where Bonney was. The deputies saw Billy but, never having seen him before, did not recognize him. Besides, he was in his socks and carrying a carving knife he was going to use to slice some beef. Billy went to the bedroom, perhaps seeking the attention of Celia Gutierrez, Pat Garrett’s sister-in-law who worked for Maxwell. Mistakenly, he entered Maxwell’s bedroom. It was the last mistake he’d ever make. Suspecting someone was there, he asked, “¿Quien es?” (“Who is it?”). Garrett answered by shooting Bonney twice in the chest. Billy was 22 years old.

The Legend Lives On at Fort Sumner Cemetery

Even in death, Billy the Kid’s  legend continues. He was buried next to Tom O’Follaird and Charlie Bowdre, outlaw buddies also killed by Garrett. The original wooden crosses were washed away in a flood. In 1940, a marble stone was laid approximately where caretakers thought the grave was but, like the outlaw Billy was, some thief stole it in 1950. It was found 26 years later in Granbury, Texas. It was stolen again in 1981, but recovered a week later in Huntington Beach, California. To prevent another theft, an iron-bar cage was erected over the grave. It hasn’t been disturbed since. Fort Sumner is home to the Billy the Kid Museum, located at 1435 Fort Sumner Avenue (U.S. 60). Billy’s grave is six miles south along NM highway 272 near the Fort Sumner Historic Site and Bosque Redondo Memorial. In 2010, Governor Bill Richardson considered a posthumous pardon for Billy, considering it a follow-through on the promise made by Governor Lew Wallace in 1879. He decided against it because, as Richardson told Jessica Hopper of ABC News, “The romanticism appealed to me to issue a pardon, but the facts and the evidence did not support it.” So it seems, the legend of Billy the Kid lives on. 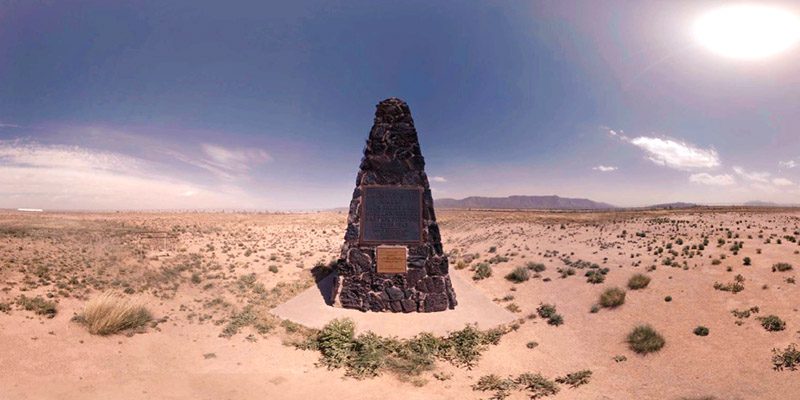 If you like New Mexico History | Chasing Billy the Kid ...Check This Out