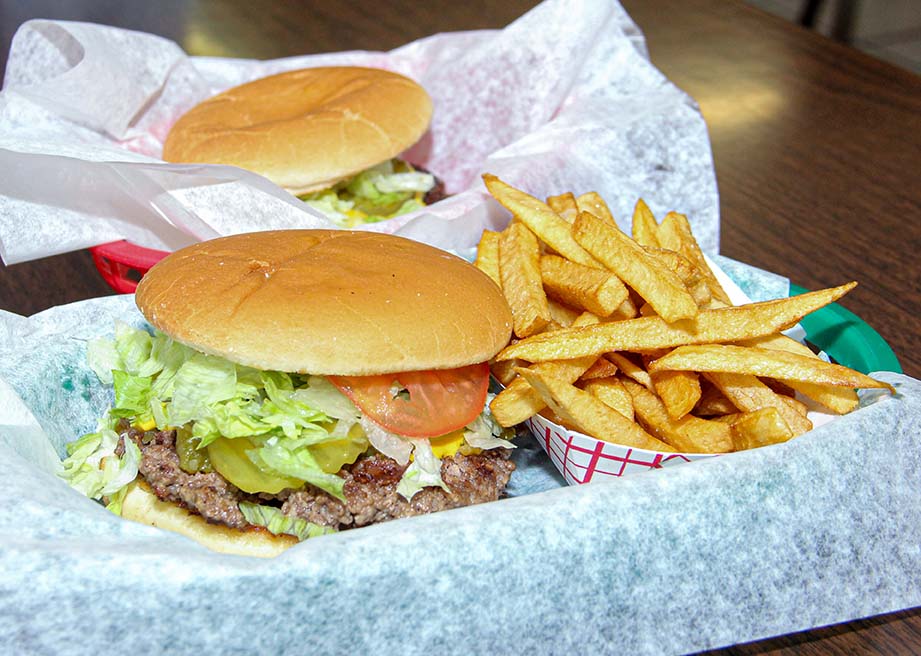 In 1983, the personal cell phone and internet were introduced to the public, movies like A Christmas Story and Ghostbusters were released, Sally Ride became the first female in space, and Martin Luther King Jr. Day became an official holiday. Closer to home, David M. Steinborn was mayor of Las Cruces, the mega band Metallica played a 13-song set in the New Mexico State University Corbett Center Ballroom, and Bob and Brenda Barnett opened the doors to the Las Cruces landmark Burger Nook, 1204 E. Madrid Ave.

It was a different time. Kids would play games and unorganized sports with other neighborhood kids, and in my neighborhood, when we were released from school, we would run, not walk, down to Burger Nook so we could beat the middle school kids who were getting dropped off from Bus 89 to ensure our orders were placed
first.

We were hungry from tackling the mind-bending curriculum of fourth-grade reading, writing, and arithmetic and eager to spend a dollar or two. Then came the anticipation, watching each burger sizzle on the grill, wondering which one was yours, before finally getting your name called and walking up to the counter as though you just won an Academy Award.

At long last, you opened your bag, and the steam from the hand-cut fries would waft up with the aroma of satisfaction. On a perfect day, all of this would occur while the middle school kids were still waiting in line and all they could do was watch with envy as you bit into the thin burger with the crispy edges and cool lettuce. Every neighborhood has its favorite hangouts, and for those who grew up in the Apodaca Park area of Las Cruces, Burger Nook was more than just a restaurant. It felt like an extension of your home and family.

Brenda and her sisters, Kualy and Cristy, have worked side by side preparing the fresh ingredients, and skillfully cooking each delicious morsel, only taking short breaks to take the customers’ orders, handwriting every order down in a spiral notebook. The sisters reminded us of our tias, greeting every customer with a smile when we walked through the door. “I have always worked with my family,” Brenda said, reflecting on the past. “They give me my strength every day. I never feel alone, and our customers have become our family, too.”

I can personally vouch for this sentiment, growing up just a stone’s throw from Burger Nook. My brothers and I were kids of a single mom and were often responsible for feeding ourselves while she was at work. More often than not, we would dial up Burger Nook’s number, and the friendly person on the other end would recognize my voice and know our order by heart. Back then, I thought it was only me whom they recognized, but when I asked Kualy about her ability to remember my order, she let me know that she does this for many of their regulars for much more pragmatic reasons.

“We are always so busy,” Kualy replied with a smile. “We know our customers and what they like, and it just saves time. So, remembering orders is good for you and for us.” It is this attention to detail and personal touch that has helped Burger Nook maintain its understated beauty and romance over the past 40 years.

The ladies’ attention to detail is not only shown through their exceptional customer service but, of course, the food that comes off the single flat-top grill that keeps the regulars coming back time and time again.

I spent the better part of a month tracking down old friends from the neighborhood and their families to talk about their favorite Burger Nook memories, as well as speaking to dozens of happy customers inside the restaurant while they waited for their food.

“These are the best hamburgers in town, hands down!” remarked customer Beverley. Then her husband, Neil, chimed in, who was decked out in NMSU garb from head to toe. “And they make you feel like family. We have been coming here for decades, and plan to keep coming until we can’t. Go, Aggies!” Joseph, who is a 23-year veteran of the Las Cruces Police Department and owner/ brewer for Organ Peak Brewing Company, recalled, “My family didn’t go out to eat much, but when we did, it was usually Burger Nook, and I remember more than anything the sisters back there cooking like a machine. As I am just starting this new chapter of my life and hope to have the same dedication and drive in my business as they do.”

Philip remembered, “I used to grab the burger deal . . . on the way home from Apodaca Pool in the summers.” With admiration for the cleanliness of the sisters and the restaurant, Berna recalls, “My best memory is being so impressed with the two ladies who wore white aprons and shirts to cook! They were immaculate.”

Phyllis told a story about her little brother, “Richard running down there straight after school since he was 5 years old to fifth grade, and my mom would drive next to him slowly, so he would get there safe.”

Pablo talked about the generations of family that have come to Burger Nook, “I took my son here when he was a kid, now he is all grown up and I bring his son, who is going to have a baby soon. I hope I can bring them here as well.”

Cecilia remarked on the memory of the sisters, “It had been years, maybe even 10 or 15 years since I had stepped into Burger Nook, and when they saw me, they remembered my name and the names of my kids.”

“I moved away years ago,” Ben said, “but every time I go back, it’s the first place I go. I sometimes dream of the smell of Burger Nook. There is no place like it.”
A lot of the people talked about the food, but most talked about the people who make the food. However, Brenda sold the business she has built for 40 years at the end of 2022 to spend more time with her husband at home. The rest of the staff, including her sister Kualy and nephew Francisco, will remain when ownership is transferred, and the recipes will not change.

“I have watched kids grow up and become parents. We have served thousands of people in this city, and we are so grateful for every single one,” Brenda said with tears in her eyes. “I can’t thank you enough, Las Cruces, and I don’t live far if they ever need me to come work a shift or two.”

To Brenda, Kualy, and the rest of the family, Burger Nook is a Las Cruces legend because of you, and we appreciate the 40 years of memories, hard work, and delicious food. We wish you good luck in the next phase of your journey.